So, I got pretty ranty in my previous post about Channel 7’s “Hainese” chicken rice in their My Kitchen Rules program. So I decided to make Hainanese (again, note the correct spelling) Chicken Rice myself. I set myself the challenge of bringing it down to its utmost basic, that is, celebrating the Chicken.

Hainanese chicken rice has a long history. The Hainanese were a people of food * other Chinese sub-ethnicities too have good food, but as a gross generalization, the single characteristic trait of Hainanese people is that they are brilliant restaurateurs . When they left China at the beginning of the early 20th century, they brought with them their flair of running restaurants. However, being immigrants with limited resources, they conserved every bit they can, which lead to chicken rice.

Chicken rice is an interesting dish in the sense that it is in my opinion, a celebration of chicken. Virtually everything about  chicken rice involves, well, the chicken. So I thought to myself, knowing how traditional Hainanese hawkers cook, on how to make good chicken rice. You will notice that one single chicken goes everywhere in this dish.

We start of course, with the chicken. In Malaysia and Singapore, where Hainanese chicken rice is known for, the most commonly used chicken is not your regular farm bred chicken. Instead, vendors would seek “kampung” chicken, where “kampung” translates  to “village”. “Kampung” chicken of course, is known in the English speaking world as free-range chicken * Essentially villagers don’t keep their chickens in coops, and let them roam wild around with village – some “kampung” chicken have been known to fly about trees too . So we start with free-range chicken, where their exercised muscles taste better.

It should be known of course, that cooking the Hainanese chicken rice this way will require more than 1 day.

The first thing we did was to brine the chicken in 9% brine for 6 hours (actually close to 7). This is to make the chicken more juicy because the osmotic pressure in the cells of the chicken will change, and holds more water * Read any high school biology text book about hydrophilic and hydrophobic cells and osmotic pressure. There is also a good layman guide here: Cooking for Engineers\ . If you would also notice, Heston Blumenthal uses this method (albeit at 8% brine) in his Perfect Roast Chicken recipe, which I have made a few times already. The reason why we used 9% brine was because the chicken was strangely large for a free-range chicken, and we wanted to cut down the brining time. To calculate the percent of brine needed, the square-cube law [ref][latex]v_2=v_1left(frac{ell_2}{ell_1}right)^3[/latex][/ref] is used, and I’ll share that some day.

Some people ‘exfoliate’ their chickens (I’m quite sure I saw my mum do that once) before cooking, but that was a task too laborious for us, so we decided not to. Use salt and rub down the chicken’s skin, and then wash off the salt. Exfoliating the chicken causes the skin to be taut and tight later on (again, for the same scientific reasons as explained above). Do that before brining the chicken.

Here’s a picture of the chicken being brined: 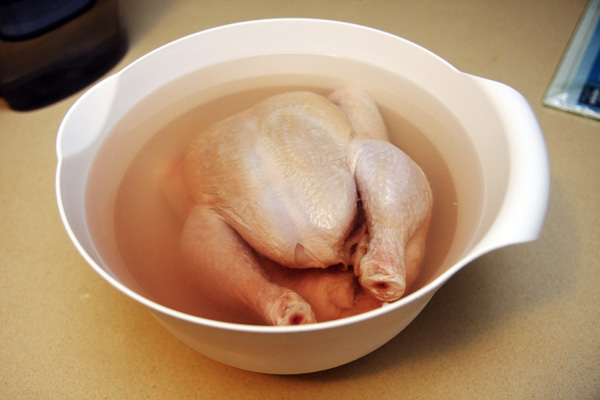 After 6 hours, the chicken is washed (note the cavity, and make sure that is thoroughly rinsed). Let the cooking begin!

Firstly, a pot of water is brought to the boil. While waiting for the water to boil, prepare separately, a bowl of ice water. When the water in the pot starts boiling very violently, put the chook in to the pot, and close the lid. Count 2 minutes (due to the size of the chicken, we put it in for 2.5 minutes), and turn off the heat after 2 minutes. Immediately remove the chicken and dip it into ice water.

The function of this is two fold – firstly, we cook the chicken, then we immediately stop the chicken from getting over-cooked, as we will be cooking it again. Once the chicken is sufficiently cooled by the ice bath, remove it, and put it on a plate. Dry the chicken with a cloth. 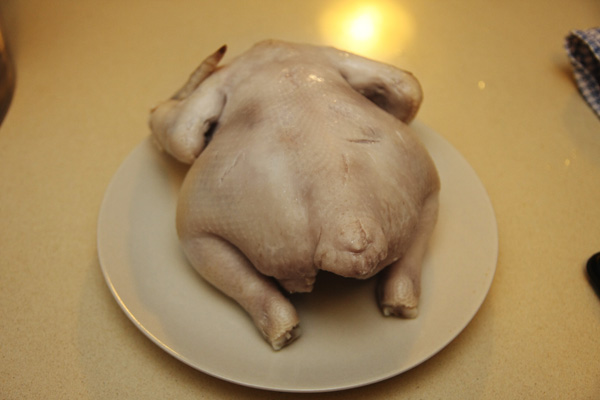 Cover the chicken with a cloth, and put it into the fridge for a period of over 20 hours.

Why is this done?

Putting the chicken into the fridge dries the surface of the chicken (but remember, the cells of the muscles still hold water). As the skin of the chicken dries overnight in the fridge, the skin, having lost water, will be forced to stretch out over the same surface area, hence appearing to be taut and tight, giving it a very waxy look. The skin is a very interesting protective layer – it protects the meat inside from all sorts of things. The fats under the skin would have congealed (it would have done so in the ice bath phase too), and causing a very smooth gelatinous skin. 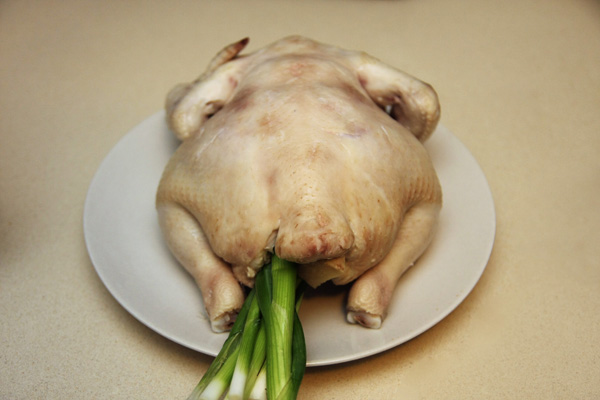 The other half of the ingredients are chucked into a pot of water and boiled. Once the water is boiling, and has turned slightly yellow from the ginger, turn off the heat. Insert a thermometer into the water and wait till the water drops to about 85°C * sucks for you if you use Fahrenheit, do your own conversion, or move to metric like the rest of the world . Once the water hits about 85°C or so, put the chicken in, and close the lid. Don’t throw away the chicken fats that may have congealed on the plate that you used to hold the chicken in the fridge as it will be used later. For the next 2 hours, your job is to monitor the temperature of the water. If it looks like it is going to fall below 80°C, turn on the heat until it hits about 85°C again.

While waiting, it would also be prudent to start preparing the other things that comes with chicken rice, amongst others,  the rice.  Skip to the section below. Also, another ice bath needs to be prepared towards the end of 2 hours.

After 2 hour of tediously checking the water temperature (or if you happen to be a rich bastard who has one of those sous-vide machines where a computer takes care of the water temperature for you), you would notice that the water has a layer of oil. Scoop it up, and reserve it, along with the chicken fats from the plate. 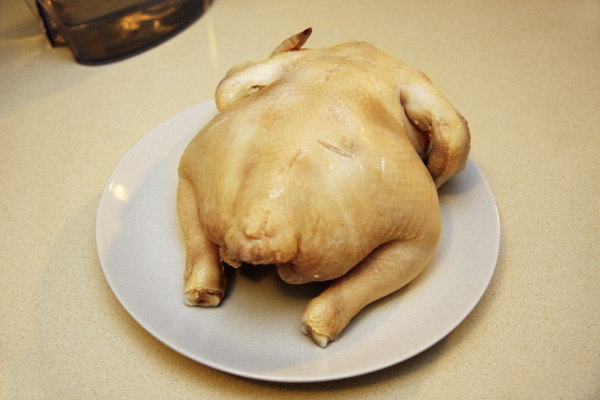 It should look yellower compared to before. Notice the waxy, oily looking tight chicken skin, which when pressed, feels gelatinous. Mmm, heavenly. Notice the bruised parts of the chicken going dark – those were errors in handling the chicken.

The next step is optional – you can repeat the steps above to get a more jelly-like skin. Do note that if you repeat the process, the skin will get more and more ugly unless you have some uber awesome skill at removing the chicken from the pot (we used tongs, which caused bruising of the chicken – a better way would be to use some sort of slotted spoot, like many hawkers do)

Okay, so to cook the rice.

The sauce is easy to prepare. Simply combine soy sauce, dark soy sauce, and chicken fat (and some stock). I also dropped in 1 drop of sesame oil – as sesame oil is a very fragrant oil, only a very miniscule amount is required (treat it like using truffle oil). Stir and serve.

As an extra side, we decided to go Cantonese, and added a spring onion sauce to this dish. To prepare it is also very simple: Julienne ginger and spring onion and put them in a bowl. Sprinkle salt.  Add chicken fat and canola oil to a pan. Heat till the mixed oils are smoking. Once they are smoking, pour them into the bowl containing spring onions, ginger and salt. Mix and serve.

Having a chilli sauce for chicken rice is quite standard, as is having chilli sauce for most South East Asian dishes. Blend chilli, ginger, garlic, lime juice and vinegar to taste. Finish it with a little bit of chicken fat on top.

Here is how it finally all came together (in before “why is your chicken so weird looking and doesn’t look like how Hainanese Chicken Rice should look like?”: I didn’t know how to cut the chicken, so all I did was to strip the flesh of its bones in a random manner): 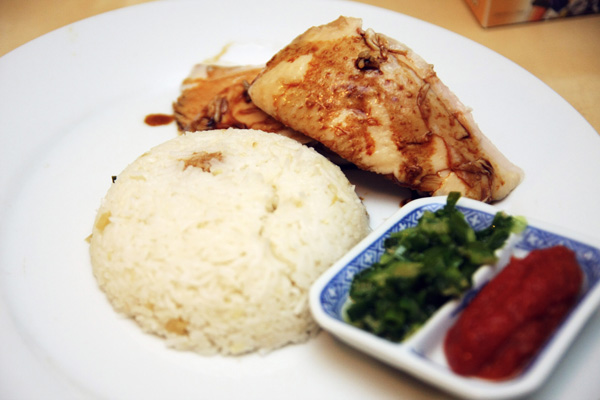 It was a long process that started at 2 pm on Friday, and we ate at 8.30 pm on Saturday. Took us about 30 hours from start to finish, but so worth it. The chicken is infinitely useful, and resources from the chicken is used in every step of making the dish. I believe it’s true to the spirit of Hainanese chicken rice – that poor immigrants from a foreign country having to use all possible resources to cook something. It also celebrates the taste of chicken. It was so moist and tender, and despite the colour of the sauce looking a bit dark, it tasted quite good as well.